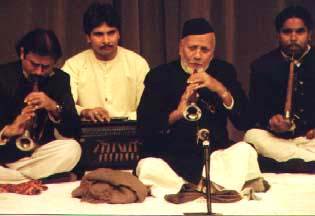 On hearing of the news of Ustad Bismillah Khansahib's demise on 21st August 06, tributes from India and around the world rightly poured in; for the world of music had lost one of its most eminent figures. The outpouring of grief, particularly in Varanasi and generally elsewhere in India, was so spontaneous and overwhelming that one has to ask oneself why this great man had this unique effect on all of us whose paths he crossed. What were those precious qualities that touched so many lives.

In Khansahib, there was moral clarity, a deep awareness of concepts of integrity and adherence to his principles. I was not his student in music, but nonetheless sat at his feet on many occasions, listening to his beautiful words of wisdom. He taught me, as did my own father throughout his life, that the means are as important as the end and that our achievements could only be lauded if they were acquired through moral rectitude and generosity.

Such figures, once we meet and interact with them, remain inspirational! They are reference points in times of moral turbulence, inspiring us into making the correct moral choices, whatever the pain involved. Such was the effect Khansahib had on my own life, both personal and professional. He continues to do so even today.

Khansahib was deeply, deeply religious. His faith, his interaction with his Almighty were paramount in his life, 'his everything', whatever the moment or occasion. This showed in many ways: a car journey to the concert hall was not spent in chatter, but in prayer; the first gesture on arriving in a hotel room was to look at the compass for the direction of Mecca; the obligatory stopover he made at a holy site on the way back to India from his European tours. This faith gave him the enormous capacity to put people and events into their proper perspective. He gave me to understand, on more than one occasion, that the concerts I offered him were welcome, but what really counted was.....and he pointed to the heavens! I shall never, never forget this.

I turned to him in moments of personal pain and loss. He offered explanations which appeared simple on the surface but had deep meaning. They were easy to grasp and understand and comforting to live with. They continue to inspire me even today.

I had the immense privilege of meeting him in 1985 and organising several European tours through to 1993. Working with Khansahib was an unforgettable experience. He was clear in what he wanted and highly professional. It was, above all, a lesson in humility, for I was in the presence of someone unique. I instinctively accepted the parameters he laid down, such was the respect he commanded.

His demise has had an enormous impact on me. I feel, in a sense, orphaned! I shall miss this unique and endearing man, God's own man, sent to touch our hearts and soul. I shall also miss that beautiful and benevolent smile!

Thank you, Khansahib. For the affection you showered, for the faith you had in me.